THE MARATHON, THE HALF MARATHON AND THE ROAD RUNNING OF ARAD 2019
RESULTS

Thank you for all the support you have shown us - together, we have managed to bring to life an event dedicated to movement for health, in the city of Arad! Whether you took part as runners, volunteers, sponsors, teammates, partners or as part of the audience, you have played a great part when it comes to promoting grassroots sports in Arad.
Below, you can find the results of the timed races during “THE MARATHON, HALF-MARATHON AND ROAD RUNNING OF ARAD - 2019”. If you notice any inaccuracies, please let us know at maratonarad@experientamultisport.ro, until the 20th of November at the latest. From this day on, the results will be final.
We invite everyone involved to share their opinion regarding THE MARATHON, HALF-MARATHON AND ROAD RUNNING OF ARAD - 2019, by filling out this form on the website (YOUR OPINION). This will be of great help to us when it comes to making future improvements, where it’s possible and within the limits of our resources, or to keep those aspects that have worked well so far. A few minutes of your time make a great difference to us, and you can rest assured that we will read and reread every single one of your notes, now and when preparing the next edition. Over the years, a great number of adjustments have been made due to the participants’ and the volunteers’ suggestions. Even if you have filled out this form for the previous editions, keep in mind that every year we have new people joining us, and it is of great help to them to know your opinion about this year’s edition.
To follow in the near future:
● Several thousands more photos from the current edition will be posted on our Facebook page. The first galleries are already there, as you have probably noticed.
● The total number of participants will be tallied, and the advisors, educational institutions and structures with most participants will be awarded.

Of all, only the best,

Sorin-Victor Roman, initiator of the event

A special prize has been awarded to Ilie Victor, a 67-year old marathonist who has thus far run 299 races.
Out of the 473 runners who had registered for the competitive races (7 km race, half marathon, marathon and marathon relay), 357 runners showed up at the start line. When it comes to the non-competitive Feroneria 0.7 km race, 787 participants picked up their starter kit.
At the finish line, Feroneria organized an interactive game with instant prizes. The participants who managed to get the right key in order to open a door were offered surprise prizes. The hydration points were provided by Alcalina life, Isostar, as well as Vegan Time. A special hydration point was offered by Vegan Time, the well-known vegan restaurant. The medals offered at the end of the Feroneria Race were crafted at the Arad factory, and they emphasized the 95 years of tradition of a company whose products and services are present everywhere around the world.
The route was prepared by Ciprian Ștefănescu from SightRunning.ro, while public order on the route was ensured by the Arad Local Police, the Arad Traffic Police, the Arad County Gendarmerie Inspectorate and Piroș Security, as well as a dedicated team of local volunteers. The event registrations office was provided with a great deal of support by the “Aurel Vlaicu” University in Arad, and the event itself was presented by Vasile Blidar and Gabriel Iazbinscky.
Just as well, part of the organising crew was the PROMOTING SPORT team, coordinated by Cristina Anamaria Nistor, through a project supported by the European Solidarity Corps.
THE MARATHON, HALF MARATHON AND THE ROAD RUNNING OF ARAD - 2019 is an event organized by the Multisport Experience Sports Club, with the support of numerous local partners, as well as our sponsors: FERONERIA, ARED, YAZAKI, WEBASTO, VEGAN TIME, PROMUN, POLICLINICA TURCIN, MULTICO, SLIM LINE INFRATRAINER, COFICAB, ISOSTAR, GENERALI and APTIV.
The last part of the event is to follow - awarding special prizes to advisors, clubs and educational institutions.

The event was supported by: 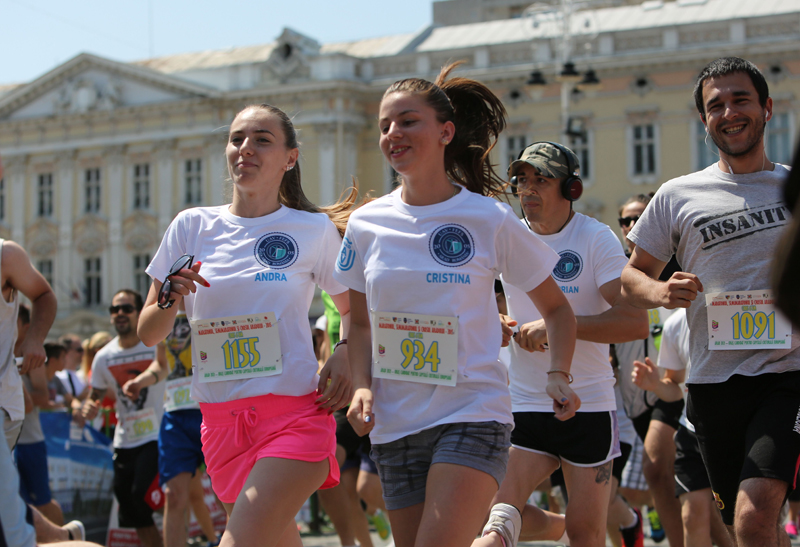